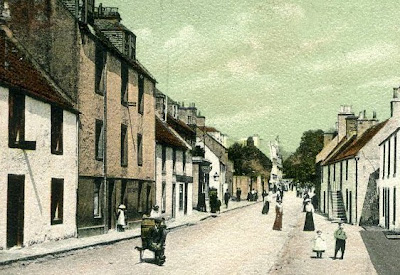 Aberdour Parish, Fife, Scotland. " Aberdour parish extends about three miles along the Firth of Forth and is about three miles from north to south. It is bounded by Dalgety, Dunfermline, Burntisland and Auchtertool. The island of Inchcolm belongs to this parish. There is a harbour which admits vessels of two hundred tons burden. Though not large, as many as twenty five vessels have been crowded into it at one time. The main export is coal. Imports are small, chiefly manure. Aberdour is not a parish where much business is carried on, though coarse cloth is manufactured to some extent; red sandstone, coal and lime are wrought extensively, and there is a sawmill. But it is as a bathing resort for summer visitors that Aberdour is best known. As it has daily communication by steam with Edinburgh, its shores are a favourite retreat to the inhabitants of the Scottish capital during the heats of summer. " Edited from Westwood's Directory for the counties of Fife and Kinross published 1862.